Julio Oscar Mechoso (May 31, 1955 - November 25, 2017) made his TV debut in the show Miami Vice as Metro-Dade Policeman Lester Kosko, the "resident electronics expert" on loan from Metro to the Organized Crime Bureau in the episodes "Heart of Darkness", "Cool Runnin', "One Eyed Jack", "No Exit", "Milk Run", and "Golden Triangle (Part II)", appeared as pathologist Tommy in the episode "Lend Me an Ear", and as drug dealer Escobar in the episode "Badge of Dishonor".

Mechoso met his wife, Linda Ruiz, in Miami at the Mutiny Hotel in the early 80s (at the time, known as a hangout for "cocaine cowboys") and they had a daughter, Melinda. Mechoso died from a heart attack at the age of 62 on November 25, 2017 in Burbank, California. 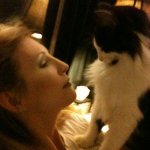